Meteor Crater Is Arizona’s Other Big Hole In The Ground 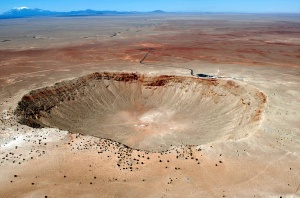 You will find the Meteor Crater 18 miles west of Winslow, AZ. It is one of two big holes in the ground in northern Arizona. Meteor Crater is the smaller of the two.

Meteor Crater is the most well preserved meteorite impact site on earth. The interesting feature of the crater is square outline.

Scientists determined the meteor impact crater resulted from an asteroid hitting the earth. To make the crater, the asteroid was traveling at a speed of 26,000 miles per hour.

Oh, did I mention this took place around 50,000 years ago. The resulting force equal to 20 million tons of TNT. Now that is a BIG Bang theory.

How Big Is It?

A movie at the Visitor Center depicts the meteor hitting the earth. Using 3D modeling it presents a realistic view of what happened on that fateful day 50,000 years ago.

Most would think the State of Arizona owns the Meteor Impact Crater site. But that is not the case. The crater belongs to the Barringer family through the Barringer Crater Company.

So how did a private company become the owner of a Meteor Crater in Arizona?

Through the foresight of Daniel Barringer. In 1894, Barringer had been an investor in the Commonwealth silver mine. The mine was in Pearce AZ.

That investment made him a millionaire. Actually a multi-millionaire. He made $15 million.

While America’s geologists believed the Crater was dead volcano. Daniel Barringer, a mining engineer from Philadelphia, did not. He believed the crater resulted from a meteor.

His company bought the Crater in 1903. Barringer believed he could find the meteorite buried beneath the crater floor.

Barringer was right about the Crater, but wrong about the meteorite. He drilled a 1,400-foot-deep shaft in the crater floor and found nothing. He died in 1929 when he ran out of money.

The Barringer family still owns the Crater and made it a tourist attraction. Making more money than Daniel ever would have made from the meteorite.

The meteor impact crater has many attributes of the moons surface. So much so, that Astronauts trained there during the 1960s and 1970s. NASA astronauts used the crater to prepare for the Apollo missions to the Moon.

And while the astronauts were able to move around on the crater floor, visitors can’t. Its off limits. Visitors can only view the crater from designated observation areas.

The Meteor Crater is an amazing place to visit, it may not be spectacular enough to make it a day trip from Tucson. It is a perfect stop on an over-night trip to the Grand Canyon. The other big hole in the northern Arizona landscape.

We are a top Realtor team in Tucson, AZ since 2002. Read our client testimonials. Give us a call. We look forward to making your home buying or selling a home an enjoyable experience for YOU!