Rocky Point Homes On The Sea Of Cortez In Mexico 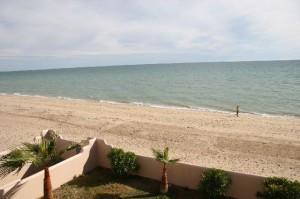 Homes In Mexico Near Tucson, Arizona

At the end of the US-Mexican war in 1846 the negotiations between the U.S. and Mexico gave this sea port to Mexico. Oops, it might have been in Arizona.

True to the great bargaining talents of the Mexican Nation, Rocky Point remains a precious pearl of theirs. The U.S. wanted a railroad route to the Pacific Ocean and a Sea Port that would allow them to not have to travel the length of Baja California to trade in the Sea of Cortez.

Puerto Penasco while not one of the best natural harbors was a prime harvesting area for Fish and Shrimp. In 1854 the U.S. Conceded and paid $10 Million for the territory that is now part of Southern Arizona and New Mexico.

One problem confronting anyone wanting to fish or live in Puerto Penasco was the total lack of water. An American by the name of John Stone built a Hotel and dug a well outside of town.

This was the beginning of the first Americans being able to travel to Mexico to fish, drink (Prohibition was in effect) and gamble. In about 1931 John Stone had many enemies in the Mexican Government and in town. Before he headed out of town he dynamited his hotel and the water system.

Rocky Point ( Puerto Penasco ) was revitalized by the Bustamante Family and open it’s doors again to travelers. Re-digging the well and opening a hotel paved the way to the many tourists that visit weekly to Rocky Point and the many Hotels and Resorts that stand today.

During World War II, the Army Corps of Engineers and the Mexican Government paved a road from the Arizona border to Puerto Penasco, Mexico. The U.S. was afraid of attacks by the Japanese. Also during the “Cold War” the Americans were afraid of Russian Submarines coming up the Sea of Cortez to be closer to Arizona and California Military Bases.

The Sea of Cortez and especially the unspoiled waters is viewed by many Rocky Point Homes.  Fishing was bountiful and quickly became fished and shrimped out. There has been a huge reconstruction of this mistake in the 1980’s when the Japanese and Korean trawlers were still allowed to fish here. Now the Sea of Cortez is all Mexican Waters and others are not allowed to fish or shrimp here. Not until the early 1990’s was the fishing and shrimping market back on it’s feet.

Today tourism has surpassed the fishing industry and Rocky Point Homes are popular.  A owner of Rocky Point Homes has some of the finest restaurants and diners to select.  Serving the fresh catch of the day in many ways that only can be found here. Fish, Shrimp and Scallop “combination plates” will astound you while enjoying paint brush sunsets and the Sea of Cortez.

Mexico may be interesting, but Tucson is GREAT. So if you are looking for Real Estate Tucson Arizona, we can help!

Questions about Tucson Homes or  the Tucson Real Estate Market or Rocky Point Homes for Sale? Call Us 866 316 5575 OR complete the CONTACT FORM and we will get right back to you!