Adapting to a Drier Future

Reflections: Adapting to a Drier Future

by Sharon B. Megdal – Director, Water Resources Research Center The University of Arizona – 08/20/2021 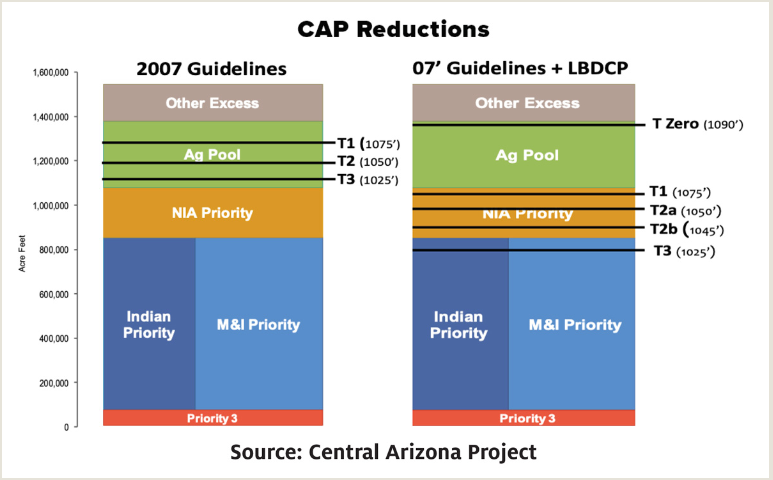 This declaration of cutbacks in water deliveries was in accordance with established Colorado River operating criteria.

Local, national, and international media have been covering the poor health of the Colorado River system for some time, with the shortage declaration bringing media interest to a crescendo.

Like many, I’ve spoken with reporters, who ask about who will be most impacted by the cutbacks in water deliveries.

The answer to this question is Central Arizona irrigators who have been utilizing “Ag Pool” water.

Central Arizona Project (CAP) has lower priority than many other suppliers and users of Colorado River water, and Ag Pool deliveries are lowest priority within the CAP.

Tier 1 curtailments do not affect Municipal & Industrial (M&I) Priority or Indian Priority water. For the most part, Non-Indian Agricultural (NIA) Priority water deliveries are not impacted until a declaration of a Tier 2 Shortage.

While it is true that water stored by the Arizona Water Banking Authority can be drawn upon to offset some cutbacks to high priority users within the CAP system, reduced water availability is always a concern, especially when the duration and severity of the poor Colorado River conditions are unknown.

It is this uncertainty that makes planning particularly difficult.

Whereas the sophisticated modeling of the Colorado River system supports projections of future river conditions, we just do not know when there might be a wet cycle – or if, as most expect, runoff conditions will continue to worsen. No one has that crystal ball for precisely predicting the future.

The system for allocating Colorado River water is complex in so many ways. It varies between the Upper Basin and the Lower Basin, and there are different systems for allocating water within a state. As discussed above, we need to look no farther than Arizona to drive home the latter point.

These details are important. I often hear it stated that Arizona has lower priority than California or that Arizona has lowest priority, but that’s not true for many Colorado River water users located in Western Arizona. In addition, the ability to lease water varies across users. Details matter.

Following are some points I have made when speaking with the media.

We have been living beyond our means for some time. The “structural deficit” in water allocations to the Lower Basin States – Arizona, California, and Nevada – has been acknowledged.

Even if climate reverted to pre-2000 conditions, more water is allocated than average river flows can support. The allocations to the Upper Basin states – Colorado, New Mexico, Utah, and Wyoming – are based on percentages, as shown in the figure below.

Lake Mead’s large storage capacity has served as a savings account, but withdrawals or outflows have exceeded inflows or deposits. Over time, this practice leads to depletion of the savings.

Just how long of a period will depend, at least in part, on conditions that water users cannot control. For several years during the last decade, efforts were made to bolster deposits to prop up savings (Lake Mead’s water level) to avoid a Tier 1 Shortage.

But that was not enough. In fact, concerns that the system could “crash,” meaning Lake Mead’s level could fall below “dead pool,” were growing during the latter part of the last decade.

In 2019, the seven basin states and the federal government came to agreement on the Drought Contingency Plan (DCP) overlay to the 2007 Interim Shortage Sharing Guidelines.

Two years later, we find that DCP (Tier 0) cutbacks were not enough. Mother Nature has not been kind. I stated in one interview that Reclamation’s declaration “is a stark reminder that the over-allocation of the Colorado River system must be reckoned with.”

I have noted that there is not a widespread feeling of panic. Given CAP’s low priority and that water flows vary even in the best of times, we have prepared — 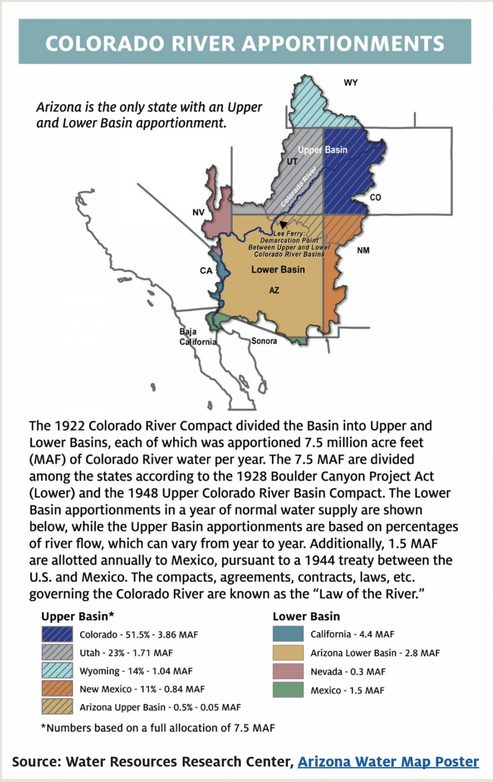 particularly by storing water underground. CAP water is not the sole source of water for many users, including Central Arizona farmers.

In 2019, Arizona adopted a DCP implementation plan with voluntary agreements to mitigate some of the negative impacts of reduced water deliveries.

However, we cannot deny that the situation is bad and has worsened sooner and faster than we thought it would. Rather than a “business as usual” mindset, adjustment – adaptation – is necessary.

After so many years of reduced precipitation and runoff, 30-year rolling averages reflect the “new normal.” While we can hope for better-than-average flows, we need to prepare for worse-than-average conditions.

In terms of adjustments, all eyes are on Central Arizona agriculture. The options for farmers are known. The decisions of individual farmers and landowners will shape that sector’s future.

We already know of plans to increase reliance on groundwater and fallowing lands.

However, less is known at this time about planned investments in irrigation technologies that use less water and changes in cropping patterns.

On the municipal front, we can expect to have more visible and active discussions of community and utility drought plans. I hope we see some adjustments to how we design our communities and their houses and buildings.

Land planners, developers, and home builders can be leaders in showing transplants how to live in the desert and be good water stewards. Let’s inform people that many of our green spaces, including golf courses, are irrigated with reclaimed water.

As has been demonstrated during Arizona DCP discussions and basin-wide, the circumstances and role of Native Nations must be considered.

Many adjustments will be needed. The Tier 1 Shortage Declaration for 2022 is based on operating criteria developed in 2007. The regulations were deemed interim at the time of their adoption and are due to expire in five years.

Discussions on the next set of operating guidelines are already underway and will preoccupy the Colorado River Basin water community. Inclusivity and transparency are critical as we adapt to a drier future.

These are challenging times. Shortage is real. In the face of many uncertainties as to future conditions, to say it will be difficult to identify pathways forward is an understatement.

Yet, I am optimistic that we will adapt – because we must.

Thank you for visiting www.premiertucsonhomes.com! It’s one of the top real estate websites in Tucson. Our clients tell us that.

We are a top Realtor duo in Tucson, AZ since 2002. Read our client testimonials. Give us a call. We look forward to making your home buying or selling experience enjoyable YOU!