The following list of Arizona state symbols is quite long. The majority of the Arizona State symbols were formally recognized by the Arizona legislature during the 20th century.

The Arizona State motto was the first official state symbol and adopted in 1864. Arizona was still a Territory at that time. The newest official symbol of Arizona is the Colt Single Action military revolver. Its recognition occurred in April 2011. Arizona was the 2nd state to officially have a “state firearm”.

Utah was the first with their adoption of the Browning M1911 in January 2011. The M1911 is a 45 caliber automatic pistol. Fifteen of the state symbols are on exhibit in the Arizona Capitol Museum in Phoenix Arizona.

The Arizona flag does not contain a state seal. It presents 13 rays of red and gold. These colors are the conquistador colors of the flag of Spain. They represent the original 13 counties of Arizona. They are also a symbol of and Arizona’s stunning sunsets.

The copper colored star in the middle of the flag represents Arizona’s copper-mining industry. The blue area on the bottom of the flag stands for liberty. 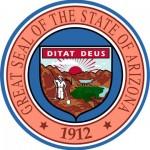 The motto Ditat Deus (Which is Latin: “God Enriches”) is in the center of the seal. The background includes a group of mountains with the sun’s rays rising behind the peaks. The Arizona State Seal has gone through three revisions since originally created.

The Arizona State Wildflower is the Saguaro Blossom.

Saguaros have a long life span. Some live to be over 150 years old. It takes somewhere between 60 and 70 years for a Saguaro to grow its first arm. Many will have multiple arms and some no arms at all. A saguaro without arms is called a spear.

The Arizona state tree is the Blue Palo Verde. It is a species of palo verde.

Palo Verde trees are native to the Sonoran Desert that surrounds Tucson. In Spanish palo verde means “green pole or stick”. This refers to the green trunk and branches.

And now some Arizona State Symbols that fly, swim or crawl.

The Arizona State Amphibian is the Arizona Mountain Tree Frog.

This little tree frog is actually endemic to Mexico. It is about 2 1/2 inches long. It lives in habitats that are temperate forests and moist montane forests. And in grassland, rivers and swamps or marshes at higher altitudes.

Staying with things that can swim brings us to the Arizona State Fish.

This Arizona State Symbol is one of two trout species native to Arizona. The other is the Gila trout. It is primarily found in the cool streams of the White Mountains. The White Mountains are east of Phoenix and northeast of Tucson.

The Arizona state bird is the Cactus Wren.

The Cactus Wren is the largest North American wren. It ranges from 7.1–9.1 in long. Unlike the smaller wrens, the Cactus Wren is easily seen. It has the loud voice characteristic of wrens. The Cactus Wren is much less shy than most of the family. Its marked white eye stripe, brown head, barred wings and tail, and spotted tail make it easy to identify.

The Arizona state butterfly is the Two-Tailed Swallowtail. 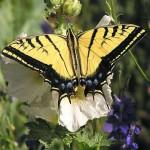 The Two-tailed Swallowtail is fairly large for a butterfly. In fact the largest in North America.

Its wing span can reach 6 ½ inches. It gets its name from the fact that it has two tails. One on each hind wing.   In April 2011, Arizona adopted a state firearm.

The Gun That Won The West

The Arizona State Symbol for this item is the Colt Single Action Army Revolver. 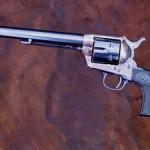 It was more commonly known as the Peacemaker or Colt 45. The Arizona early frontier was a place where each person had to be ready to protect themselves.

The Colt 45 was a mainstay in this endeavor during the late 1800’s. Now for the one the Arizona State Symbols no one wants to meet in person.

The Arizona ridged-nosed rattlesnake is a rather small rattlesnake. It will measure one to two feet in length. Color patterns show a dark brown base with pale or white horizontal striping.

However, this will vary slightly between subspecies. It is named for the distinctive ridges along each side of its nose.

Are you moving to Tucson Arizona, thinking of retiring in Tucson OR having a winter retreat in our great weather? We can help!