The Titan Missile Museum Is An Outstanding Tucson Museum 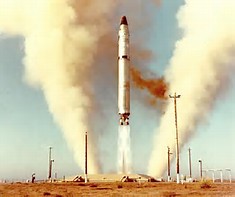 The containment strategy created an arms race. Both the U. S. and Russia expanded the number of nuclear weapons in service. As the stock-pile of nuclear weapons grew, the U.S. established the military concept of mutual assured destruction. Or MAD. Yes, it was a MAD idea.

During the period from 1961 to 1963, the government built 54 Titan II missile sites. The sites were in Arizona, Kansas, and Arkansas. Each state had 18 sites. All near large Air Force Bases.

The Strategic Arms Limitation Talks required Titan II missile sites deactivated in 1982. From 1982 to 1987, the military removed the missiles. Titan sites were not only closed but destroyed.

Except one. By treaty with Russia, the site in Sahuarita Arizona remained. Russia allowed it to survive as a museum and tourist attraction. The Site became a National Historic Landmark in 1994.

What Made The Titan II So Important? The fuel system. The predecessor to the Titan II was the Titan I. An ICBM that could deliver a nuclear warhead to Russia. But, due to an unstable fuel system, it required almost an hour to fuel and launch. Not good when the inbound missile arrives in 30 minutes.

The Titan II fuel was stable. That meant once fueled the missile was always ready to launch. Launched in 58 seconds! This ensured the MAD would work.

The Titan II missile was the largest land-based missile ever used by the United States. And the Titan Missile Museum is the only place visitors can see the missile and missile site.

Four member launch crews worked 24 hours on and 48 hours off. When “on duty” two crew members were always together. Each crew member keeping watch over the other.

If a crew member acted suspiciously, the other person shot first and ask questions later.

A Titan II could send a 9-megaton nuclear warhead to targets more than 6300 miles away in about 30 minutes. The destructive power of the warhead could obliterate an area 35 miles in diameter.

The 103-foot missile inside the museum silo has neither warhead or fuel. By US/USSR agreement, the silo doors cannot open more than half way. The dummy reentry vehicle mounted on the missile has a prominent hole cut in it to prove it is inert.

Facilities at the museum remain intact. Complete with the original equipment.

The Titan Missile Museum is a one of a kind experience. What was one of America’s top secret places is now a National Historic Landmark. Its mission is to bringing Cold War history back to life.

Directions to the Titan Museum

Take I-19 south from Tucson to Duval Mine Road. Go west about 1/2 mile to the entrance. MAP

And if you are considering Tucson as a future place to live, we can help. We are a top Realtor team serving the greater Tucson area since 2002.