Tombstone AZ Is The History Of The Southwest

Visiting Tombstone Is An Great Day Trip From Tucson AZ 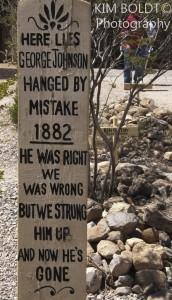 The town of Tombstone AZ means many things to many people. For some, images of drunken cowboys, gunfights and dusty streets come to mind.

Gunfights were frequent in the Tombstone during the 1880″s.  But the most famous gunfight involved Wyatt Earp and his brothers Morgan and Virgil. And of course Doc Holliday.

Hundreds of western movies have made it famous.

Over 50 different movie and TV projects focus on the mid 1800’s in Tombstone. And the leading character in every show was Wyatt Earp.

Watching television during the 50’s and 60’s brought the old west into many homes. Many shows and movies presented the history of Tombstone AZ and the events that took place there.

And the youth today don’t realize that Tombstone AZ is a real town. And real people still live there.

Tombstone, the town to tough to die is 60 miles southeast of Tucson AZ. Some families are decedents of those who have lived here in the “good old days”.

To Set The Stage – No Pun Intended

Tombstone AZ got its name from a silver miner named Ed Schieffelin.

Schieffelin was a army guide at nearby Camp Huachuca. He believed the surrounding mountains held the promise of silver and gold.

When the occasion allowed, Ed would go to the mountains and dig for ore. As he was venturing out one day, a soldier cautioned about the Apaches in the area. The soldier Ed he wouldn’t find riches in the mountains. and that “All you’ll find in those hills is your tomb-stone”.

In February 1878, while hiding from Apache Indians, Schieffelin found silver. And with the soldier’s comments in mind he registered the lots as; “the Tombstone” and “the Graveyard”.

Needless to say, Tombstone Arizona flourished. Its population grew from 100 to around 15,000 in less than seven years. And as it grew and easy money became available. Many outlaws and criminals found their way to Tombstone AZ.

With the bad guys came the law. Some lawmen arrived without notoriety, but became legends. Wyatt Earp was one of those. Wyatt arrived in the summer of 1879. He had been an undistinguished peace officer in the Kansas cow towns of Wichita and Dodge City.

Wyatt was also a part-time gambler or “sporting man”. His arrival in Tombstone coincided with the early beginnings of the silver boom.

In the spring and summer of 1880, Earp did well for himself as a gambler. Seeing opportunity, he invested gambling winnings in various mining and water-rights proposals.

Although becoming rich, Wyatt and his brothers did little to distinguish themselves.

Shoot Out At The OK Coral

On the morning of October 25, 1881 Ike Clanton and Tom McLaury came into Tombstone for supplies. Over the next 24 hours, the two men had several violent run-ins with the Earps and their friend Doc Holliday.

The next day, Ike’s brother Billy rode into town to join them, along with Frank McLaury and Billy Claiborne. The first person they met in the local saloon was Holliday. And he inform them that their brothers had both been pistol-whipped by the Earps. Frank and Billy immediately left the saloon, vowing revenge.

With suspicion raised, the Earps and Holliday patrolled the town. They spotted the members of the Clanton-McLaury gang in a vacant lot behind the OK Corral.

The famous gunfight that ensued. It lasted about 30 seconds with around 30 shots fired.

There is still debated about who fired the first shot. But legend suggests it was Virgil Earp. At the faceoff, he pulled out his revolver and shot Billy Clanton point-blank in the chest.

Wyatt wounded Frank McLaury with a shot in the stomach. But he Frank managed to get off a few shots before collapsing. Ss did Billy Clanton.

When the dust cleared, Billy Clanton and the McLaury brothers were dead. Virgil, Morgan Earp and Doc Holliday got shot. But the wounds were minor.

And Ike Clanton and Claiborne had run for the hills.

Sheriff John Behan of Cochise County saw the shootout. He charged the Earps and Holliday with murder.

But a month later, a Tombstone judge found the men not guilty. He ruled that they were “justified in committing these homicides.”

The Good, The Bad, The Legend

But in the early 1880’s, Tombstone Arizona was one of the most notorious and violent towns in the west. And at the same time may also have been one of the more civilized. The city boosted 4 churches, a school, two banks, a newspaper (“The Epitaph”) and one opera house.

Although Ed Schieffelin founded Tombstone, it persists because of Wyatt Earp, his brothers and Doc Holliday. Their exploits on the Arizona frontier of the early 1880’s made them and Tombstone a legend.

The gun fight at the OK Corral took place in 1881. Of all the gun fights in the history of Tombstone this 30 seconds stands out. The dramatic confrontation left three men dead and three wounded. In less than a minute, around 30 shots were fired. And it created the legend and history of Wyatt Earp.

The Tombstone Of Ed schieffelin 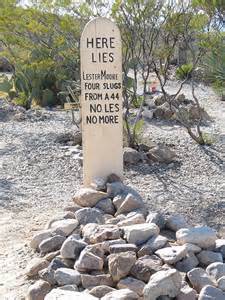 In the northwest corner of Tombstone AZ is the famous Boot hill graveyard. And just behind the Tombstone graveyard is a solitary pyramid looking stone monument.

It marks the grave of  Ed Schieffelin. His resting place is the spot were he was hiding from the Apaches and found the silver ore that made him rich.

Many of the buildings have stood for over 100 years and the street scenes will whisk you back to that first Glenn Ford western. Buggy rides will take you for a tour of Tombstone.

Walk through the Boot hill cemetery and read the classic epitaphs from long ago – Here lies Lester Moore, four shots from a 44, No Les, No More.

Tombstone is a great day trip, along with Bisbee and Tubac. All are within 90 minutes from Tucson and great places to help you “Relive the Old West”!

Considering A Home In Tucson, AZ?

Are you thinking of buying a home in the greater Tucson area? Finding the right home can be a challenging process. But we can make the process much less stressful for you.

We have been Tucson Realtors since 2002. We know Tucson and the Tucson Real Estate market. As a top Realtor duo, we invest the time to understand your home buying interests and desires. At our first meeting, we will review the current real estate market with you. Show you the market data and then walk you through the Arizona home buying process.

Why? We want you to know what to expect. And what to plan for.

For us, you are not another real estate transaction. You are a client and, future friend. We strive to create a relationship that continues long after you move into your home. Review our profiles. Check out our backgrounds, education, and certifications.

We are here to help you “know what you need to know” to buy a home in Tucson, AZ. We provide you information on Tucson events, places to shop and restaurants. Our resources include contractors, electricians, and home services. We will also help you get deals on tile and paint to make the home you buy yours. Our professional service backgrounds mean we put you first!

Tombstone AZ is about an hour drive from Tucson AZ. It is a great day trip and well worth the time. Visitors are treated to reenactments of the gun fight at the OK coral through out the day. The is ample opportunity to stroll along the boardwalk and imagine what it would have been like to live inn those times.

We are a top Realtor duo in Tucson, AZ since 2002. Read our client testimonials. Give us a call. We look forward to making your home buying or selling a home an enjoyable experience for YOU!

Considering a move to Tucson or one of the  surrounding communities in Southern Arizona? We can help.